Hot glue is an excellent semi-permanent material for certain electronic works. Some of its main benefits are quick setting time, watertight sealing, and the option to peel it off when necessary.

In this article, we will look at the conductivity of hot glue and the best time you use it for a project. 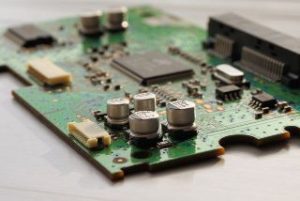 Why is Hot Glue Not Conductive?

Hot glue is basically a plastic resin, which means it cannot create a conducting path for electricity. This makes it safe to use for your electronic projects. No need to worry about a short circuit or high frequency losses.

The glue is made of polyurethane, and is 100 percent solid at room temperature. However, it will melt when subjected to heat, so it’s usually applied in molten state. Specifically, the melting temperature is around 250-380 degrees Fahrenheit.

Thus, you don’t want to use hot glue on any thermal sensitive component or device that give off a lot of heat. If you do, there’s a good chance the glue will melt at some point, which can cause deformation of the parts.

If you do decide to use hot glue for your electronic project, do so with care and you shouldn’t have any problems.

Here are the main properties of hot glue worth noting, especially with regards to it’s electrical conductivity.

As earlier indicated, hot glue has a melting temperature just over 200 degrees Fahrenheit, which makes it heat sensitive. So, it’s NOT suitable for high temperature applications or on thermally sensitive components that can generate heat.

That said, in terms of strength, the glue is comparable to epoxy glue and is perfect for projects where you cannot use epoxy.

Hot glue is a polymer-based glue, which makes it a poor electrical conductor. So, it can serve as an insulator, not a conductor.

A lot of people use it in circuit boards, switch boards, and even computer parts. However, don’t just use it anywhere. Like we said earlier, the glue is heat sensitive, so it’s not meant for components or devices that generate heat.

It can be a safe way to maintain wire connections since it doesn’t conduct electricity.

Due to its insulating qualities, hot glue is an excellent choice for a semi-permanent material, which can be used in electronic projects.

This means you should use it as a temporary solution. To make things easier, you can peel it off when needed.

For instance, you can use it in a temporary electrical circuit like a breadboard to insulate the board from other components. It can also be a good alternative to an electrical tape, especially when you have sharp points that can cut through the tape.

Hot glue tends to soften with heat, which makes it unsuitable when heat is produced. Many computer parts and electronics generate some amount of heat. You wouldn’t want to use hot glue for such tasks, especially if you’re concerned about safety.

However, there are still certain situations where it might be safe to use hot glue for electronics. These include:

If you notice, the first three components are passive but “rugged”. They don’t have any plastic or parts that hot glue can damage. However, other passive components like an electrolytic capacitor usually come with a plastic wrapper which can melt and get ruined when exposed to hot glue. Altogether, avoid hot glue on plastic parts.

Here are some components that are not usually safe to use with hot glue:

All these components usually come with metal bodies that generate a lot of heat during operation. This heat can melt hot glue causing it to lose its strength and break.

For safety reasons, it’s generally recommended not to use hot glue on electronic components.

Can You Use Hot Glue Instead of Electrical Tape?

Yes, you can but it might not always be the best solution. Since both items are not conductive, you can use one in place of the other for insulation purposes. But they don’t possess the same strength and durability.

Due to the bond it creates, it can be very difficult to recover a component once you’ve applied hot glue to it. So, except you don’t intend to separate the joint in the future, you can use hot glue in place of electrical tape.

Otherwise, you should probably stick with your electrical tape.

Can you put hot glue on wires?

Yes, you can use hot glue on wires. As earlier indicated, hot glue creates a strong joint between components and that includes wires. Thus hot glue can be used to connect and insulate wires.

Also, since the glue cools very quickly, there’s no need to clamp the wires down.

However, given the strength of the glue, you may no longer be able to separate the joint. So, hot glue is best used on wire as a permanent solution.

Can I use hot glue instead of solder?

No, it’s not practical to use hot glue in the place of solder for most soldering tasks. There are three determining factors here: melting temperature, electrical conductivity, and ease of use.

Soldering typically requires much heat transfer from the tip of the soldering iron to the wires or metal parts being joined. This is how the electrical or mechanical bond is formed. Consequently, the melting of solder usually occur at a very high temperature.

It happens that the melting temperature of hot glue is much lower than that of solder. As a result, a hot melt glue gun doesn’t usually get as hot as a soldering iron.

Many soldering projects involve creating an electrical bond between the joining parts. This is commonly the case in high frequency circuits or heavy power-related electronic jobs. Since hot glue is made from plastic, it doesn’t have any electrical conductivity. Thus using the glue for such applications will not be appropriate or safe.

If you must use glue, then it has to one with metallic properties such as metallic glue or wire glue.

Soldering isn’t rocket science but you some basic knowledge to use a soldering iron. So, not everyone can pick up a soldering gun and say they want to join components.

On the hand, anyone can use a glue gun and that is because it’s very easy to use. No technical skills is required and you can get started right away even as a beginner.

However, glue guns are not perfect and can get messy. But you will get better at it.

Can you hot glue a PCB?

It depends on where you use it. A PCB itself is a non-conductive material which makes it safe to use with a hot glue. However, the board also has many conductive layers etched in it. You may be able to use hot glue to stop flex on a PCB but that depends on the components that are mounted on the board. Our recommendation is not to use hot glue on any electronic component that can generate heat.

Can I use hot glue on a circuit board?

Yes, you can use hot glue on a circuit board as long as you don’t apply it on sensitive parts or components. You can use it to attach components but it’s not meant to replace solder.

Avoid using the glue on any conducting part on the board as this can lead to erratic behavior. Also, don’t use the glue on plastic or silicone parts.

Does hot glue work on metal?

Yes, just like super glue, hot glue works on light metal. It can be used to make a metal to metal connection. It will also work if only one of the surfaces is a metal. The same cannot be said about super glue.

Hot glue can be applied to a lot of surfaces but it won’t always the best solution. If you intend to use it for electrical connections or on electronics, then it should be as an insulator or semi permanent material. This is because hot glue is not conductive.

Generally, the glue is not ideal for high temperature environments or in components that give off heat. Also, we don’t recommend it for high strength applications.

No comments to show.